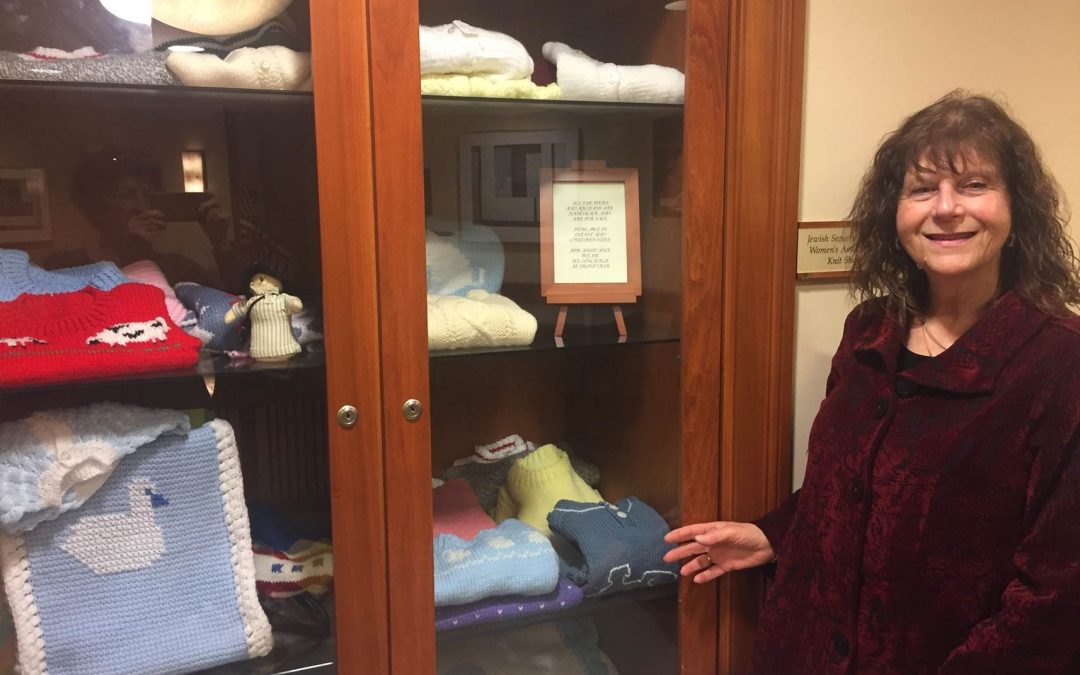 Do you love to knit, enjoy spending time with like-minded men and women who value our seniors, have a flair for decorating, event-planning or gift-wrapping; enjoy knitting sweaters, hats, and afghans for babies and toddlers to sell in the organization’s Knit Shop; or simply want to give back to our community on a time-limited basis, the Friends of Jewish Seniors encourages your participation, engagement, and membership. “One of our commandments is ‘Honor thy father and mother,’” says Niecie Weiner, president of the Friends of Jewish Seniors, and a current board member of JCS and former Jewish Seniors Agency (JSA) board member. “What better way to do that than to honor the Jewish seniors in Rhode Island?”

Just as the Women’s Association raised funds to support programs and housing for Jewish seniors, so, too, does the Friends of Jewish Seniors, which seeks new members, says Weiner, whose maternal grandmother, Annabelle Mutchnick, and parents, Harold and Marcia Gerstein, volunteered independently at the Jewish Home. She recalls, laughing, “My grandmother, then in her 70s, before heading to the Jewish Home, would say, ‘I’m going to visit the old people.””

Lauding Susie Adler and Dori Adler as well as her colleagues, Myrna Levine, secretary, and Roberta Schneider, vice president, for their contributions, Weiner says, “This work affirms our Jewish values, for me. Hearing Susie and Dori share stories about the impact of their programs is very heart-warming, too.”  A former JSA board member and current JCS board member, Levine also served on the Partnership Committee which was instrumental in negotiating the formation of JCS.

A long and meaningful history

At its heyday, recounts Weiner, the Jewish Home was located on Hillside Avenue in Providence. “The women used to have linen luncheons to raise money to purchase bedding, sheets, towels, etc., for the residents; they could raise $30,000 to $40,000 at a single luncheon,” she says. “Then, these very bright women – generally not working outside the home – were ingenious and dedicated in helping the seniors at the Jewish Home.”

With the closing of the Jewish Home in the 1990s, the Women’s Association stepped up to raise money for JSA Adult Day Center and, eventually, Tamarisk, says Weiner, with pride. “We all take care of each other, and being there for the seniors, among the frailest of our populations, is very important. Being there [for the elderly] to show respect and to show that people still care for them is so important.” The Friends of Jewish Seniors are committed, she adds, to continuing this long-standing mission.