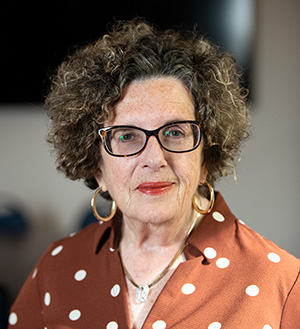 Bonnie directs Shalom and Shalom II affordable housing complexes, including the Shalom Mealsite as well as tenant services and activities. Under her guidance, Shalom Apartments have developed a reputation both locally and nationally for creating an enriched environment where residents thrive.

Bonnie has more than 30 years of experience as an executive in long-term services and supports, with expertise in aging issues, operations and facility management, and budget and grant administration. She maintains strong relationships with tenants, community groups and regulatory bodies, including HUD and Rhode Island Housing. Innovations at Shalom have included a $1.4 million grant-funded Green Energy Retrofit, which received an Environmental Council of RI award for Outstanding Conservation Project.

While at Shalom, Bonnie developed Rhode Island’s first social service program for senior housing, with an investment protocol that was later adopted by HUD as a national requirement. In partnership with URI, she also developed and directed a comprehensive fall-prevention program that was adopted by the RI Department of Health.

Bonnie has a history of community leadership in long-term services, serving as Vice Chair of LeadingAge RI’s organization and as a member of the Long Term Care Coordinating Council, the RI Health Department’s Falls Prevention Subcommittee, the RI Housing Resource Commission and other boards and committees. She has also presented at numerous conferences on issues of safety in housing for the elderly. Bonnie received her BA from City College of New York and her master’s degree from Rhode Island College.