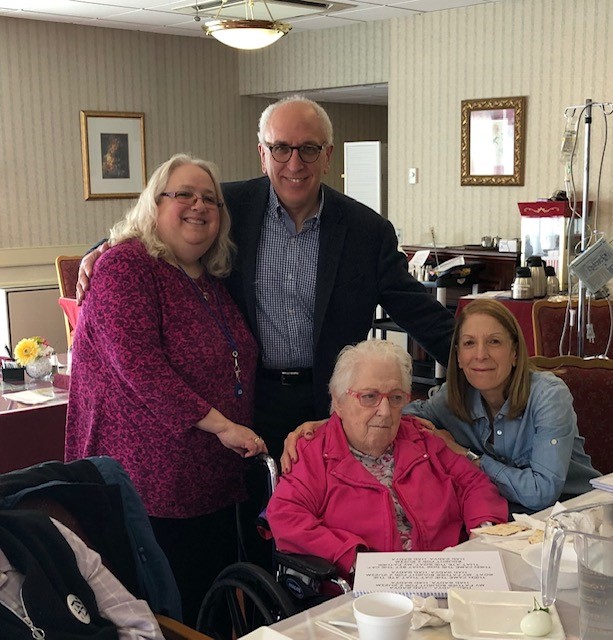 “If it weren’t for Dori Adler, the Jewish Eldercare of Rhode Island (JERI)’s part-time program coordinator, and me, many elderly Jewish residents living in Rhode Island’s assisted living facilities or nursing homes wouldn’t see anyone else except staff, as their family and friends have passed,” said Susie Adler, the coordinator of Jewish Eldercare of Rhode Island (JERI) and a certified dementia practitioner. Susie, who earned a degree in gerontology in 1985 from Rhode Island College and cared for her own parents, the late Edward and Gertrude Adler, until their passing, said, “So many times we go in to console them, and yet they console us.”

JERI, originally a program of the Jewish Seniors Agency, brings Jewish traditions, values and Yiddishkeit to those individuals; even those professing no ties to Judaism often perk up when they hear Susie sing traditional Shabbat or holiday melodies. While visiting a woman who was unconscious and nearing death, Susie learned from her family members that she liked klezmer music. With 21st century technology – YouTube and a smart phone – Susie played some klezmer tunes, which started the woman’s feet moving in time to the beat. “Her family was with me when I did it… our jaws dropped,” she said.

Currently, about a dozen active CHAVER volunteers visit seniors in nursing homes or assisted living facilities. A JERI program, CHAVER, which means “friend” in Hebrew and stands for Caring Helpers and Visitors Empower Residents, supplements the monthly visits Susie and Dori make. After receiving training, CHAVER volunteers are generally matched with one or more individuals, to foster relationships with those they visit for 30 minutes or so on a regular basis; some visit weekly, others monthly. Acknowledging that visiting a complete stranger for the first time might feel awkward, Susie and Dori are happy to accompany new CHAVER volunteers on their initial visits. “It doesn’t matter if you’re Orthodox, Conservative, Reform, Reconstructionist or unaffiliated; if you want to reach out to our Jewish seniors, we’re happy to have you,” she said. Susie hopes to re-invigorate a JERI program, Just to Say Shalom, where volunteers call homebound Jewish seniors each week to ask how they are and to wish them Shabbat Shalom.

Susie, Dori and their CHAVER visitors derive joy from seeing the reactions of those they visit. “Their faces light up; they might not know our names, but they know we love them unconditionally,” she said. “We’re here to visit; we’re not here to lecture or give medication or deliver a bad diagnosis. We’re here to be friends. We have no judgment, and they can tell us anything they want.”

When Susie hosts holiday services – sometimes for a group, sometimes for a single resident – emotions and memories are often triggered. In one instance, Susie introduced herself to one nonverbal Jewish resident and explained that she was about to lead a Hanukkah program for her. Susie began to chant the blessings over the candles and offered the woman jelly donuts. “She had no reactions at all, until I started to sign ‘Hanukkah Oh Hanukkah’ in Yiddish,” Susie said. “She picked up her head, opened her eyes and stared at me with tears running down her face. That was her connection; it resonated for her.”

Given the relationships she and Dori develop with patients, their deaths can deeply affect them.  “They’re our extended family,” said Susie. “Jewish Collaborative Services staff members are wonderful; they know when something happens. They’ll give me a hug and be supportive.”