‘Waves’ of generosity to the community alleviates hunger and the need for necessities. 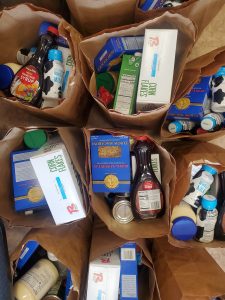 As residents of the Ocean State, we know the positive – and negative – impact of the ocean’s waves: Gentle body-surfing waves and waves of joy, love, and elation have a markedly different impact on us than do hurricane-driven waves, and waves of grief, loss, and hunger. To that end, Jewish Collaborative Services (JCS) set out to crush people’s waves of hunger and needs by implementing several distributions of food and personal care items”.

“While our first wave of distribution, early in the pandemic, focused exclusively on members of the Jewish community in need, all the other distributions 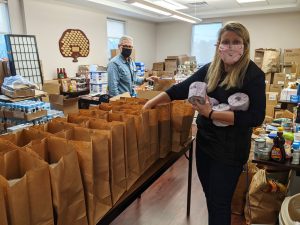 that followed have been for anyone who needs help,” said JCS Director of Clinical and Community Services Janelle “JC” Roussel. JCS staff reached out to the synagogues, day schools, and anyone with connections to JCS, supplying individuals and families with food and personal care items of toilet paper, paper towels, hand sanitizers, masks, dish detergents, etc.

“I can’t tell you how proud I am of my staff. They risked their own health delivering to people’s homes,” said Roussel. “Not only did they pack the bags, but they were also in charge of getting them delivered to households – both unaffiliated and affiliated with a synagogue or day school.”

Funding from the Jewish Alliance of Greater Rhode Island and the Rhode Island Foundation has helped pay for personal care items, which are expensive. While we have access to food from the Rhode Island Community Food Bank, we have to purchase hechshered (specifically marked kosher) food because our pantry is serving individuals and families who primarily keep kosher. In addition, at the beginning of the pandemic, Ocean State Job Lot gave JCS a huge discount on the personal care items which were loaded into no fewer than 12 shopping carts! 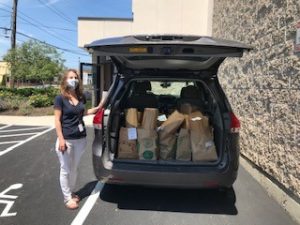 In the first “Wave,” in early May, JCS provided bags to 104 households representing some 150 individuals. While some may doubt the need in the Jewish community, the need absolutely does exist: Thirty-eight families were referred by four synagogues and a Jewish day school. JCS case managers referred five families. In addition, 60 seniors who participate in the Kosher Senior Cafe and/or Meals on Wheels – the majority of whom are Jewish – received assistance from this ‘Wave’.

Between some of the waves were ripples of help, as well.

In ‘Wave 2, Ripple 1’ – during the week of May 15 – JCS delivered 150 grocery bags of food and personal care items to a total of 140 households, representing some 180 individuals at Shalom Apartments, JCS’ affordable housing apartment complex for seniors and those with disabilities, in Warwick.

During ‘Wave 2, Ripple 2′ – in late June – 172 households, representing about 258 individuals, received bags of food and personal care items. Of those households, more than 130 of them were referred by nonprofit organizations throughout Rhode Island, unrelated to the Jewish community.

In all, as of mid-March 2021, 754 households representing an estimated 1,028 individuals, received the relief, thanks to the contributions made to JCS this past year. “Every time I go through another wave, I am amazed, they’re [staff and volunteers] getting it done and going above and beyond,” added Roussel, “all in the middle of a pandemic.” Just as the ocean’s waves continue to break on the shore day after day, JCS will continue to do what it can to help those in Rhode Island who are food insecure.

If you or anyone you know needs assistance, please reach out to JC Roussel at Janelle@jfsri.org or fill out our ‘Help Form’.