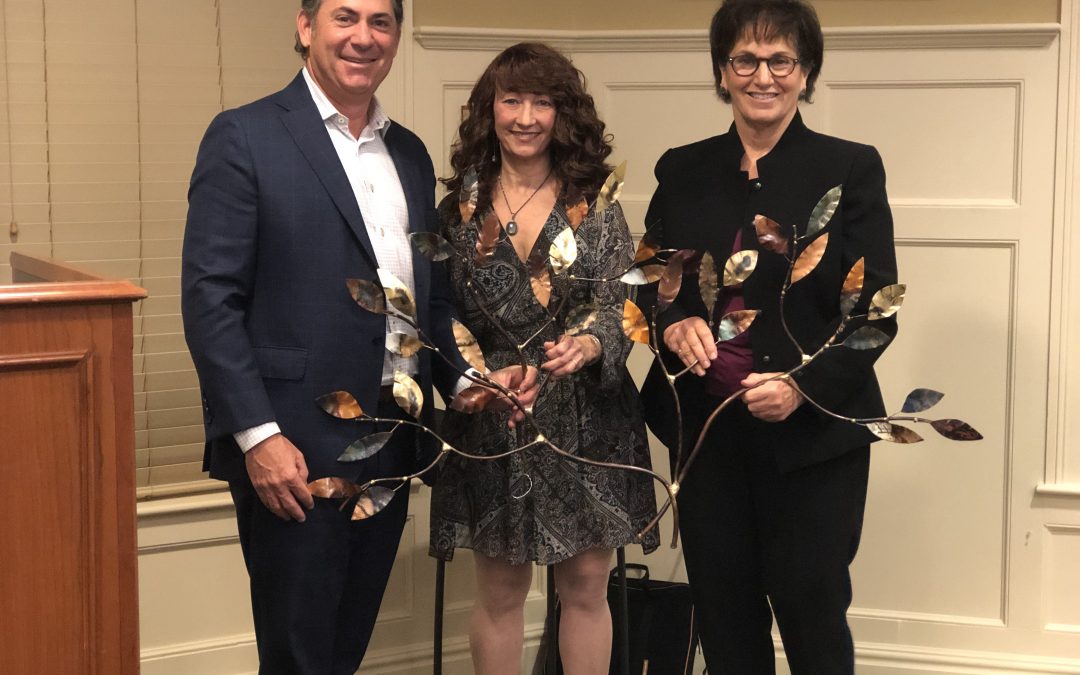 “There will be peace in the Middle East before Jewish Family Service (JFS) and Jewish Seniors Agency (JSA) merge,” said James Galkin, at Jewish Collaborative Services’ (JCS) second annual meeting on Tuesday, Nov. 5, quoting a well-known Jewish community leader who reportedly uttered those words after being asked for financial support. While neither he nor any other member of our Jewish community brought peace to the Middle East, Galkin, a JCS board member and longtime JSA supporter, stated that dedicated community leaders negotiated many challenges to bring the two long-standing social service agencies into JCS.

Enthusiasm and quiet pride – coupled with a clear-eyed awareness of the work yet to accomplish – permeated the meeting room at the Phyllis Siperstein Tamarisk Assisted Living Residence. Jewish Alliance of Greater Rhode Island President & Chief Executive Officer Adam Greenman congratulated JCS President & Chief Executive Officer Erin Minior and her team on a successful first year. “At the Alliance, we talk about a strong vibrant Jewish community in Rhode Island … and the elements that make that up,” said Greenman. “Most important [is] how a community ensures it helps those in need or in crisis. We couldn’t do that without the work JCS does; it provides the backbone of our support.”

With humor and efficiency, Stacy and Doug Emanuel chaired the meeting, which included a d’var Torah by Temple Emanu-El Rabbi Michael Fel, elections and installations of new board members and officers and the JCS treasurers report. In a brief video presentation, past JCS Board Chair Jeff Padwa summarized several of JCS’ first-year accomplishments:

Quoting a proverb, “If you want to go quickly, go alone, but if you want to go far, go together,” Minior noted other accomplishments, including moving into a brand-new building, with financial support from the Grace K. and Wesley S. Alpert Foundation; nearing completion of the $4 million “Past, Present, Future” campaign; recruiting additional board members; identifying opportunities for improvement in HR, IT and other backroom functions; and expanding its marketing outreach. Looking to the future, Minior identified several initiatives that should lead to a stronger, more unified and more effective agency. The Warwick campus – with Shalom and Shalom II apartments (which paid off its 40-year mortgage this year) and Tamarisk – offers potentially new development and program opportunities, said Minior, who lauded Shalom Executive Director Bonnie Sekeres and Tamarisk Executive Director Roberta Ragge.

Describing the goals and objectives of the Partnership Committee – charged with unifying the two agencies, each with a rich and vibrant history of service –JCS Board Chair Marisa Garber said, “We all wanted the same thing; a social service and housing agency for the people of our community throughout the lifecycle.” Garber summarized JFS and JSA histories, applauded fellow board members, and identified her goals.

In closing, Galkin offered a heartfelt tribute to Susette Rabinowitz, who was the driving force behind the creation of Tamarisk, after the Jewish Home was unexpectedly closed. Now a Tamarisk resident, Rabinowitz was present to hear Galkin’s testimonial and the enthusiastic applause that followed.  (Read more about Susette’s story here)

On the afternoon of Sunday, Nov. 17, Tamarisk hosted the annual meeting of Friends of Jewish Seniors of JCS, formerly the Women’s Association of Jewish Seniors Agency, which drew an intimate group. The Friends of Jewish Seniors, which is eager to expand its membership, elected the following officers: Bernice (Niecie) Weiner, as president; Roberta Schneider, as vice president; Maybeth Lichaa, as treasurer; Myrna Levine, as recording secretary; and Marilyn Smith, as corresponding secretary. Susie Adler and Jane Jacober were elected directors of the organization, which focuses on raising funds for JCS by offering programs to support and enrich the lives of Rhode Island’s Jewish seniors.

Individuals who join the Friends of Jewish Seniors (yearly dues are $15 per person, and a life membership is $200), fulfill the Fifth Commandment, “Honor thy father and thy mother.” “Our programs help the frailest members of our community,” said Weiner. “Participating in Friends of Jewish Seniors is a way of honoring anyone who is elderly and frail. These individuals gave so much to our community for so many years; it’s time to give something back to those seniors.” Volunteers also serve as good role models for their children or grandchildren, added Weiner.

Those attending the annual meeting had eagerly anticipated a latke-making session with Tamarisk Executive Chef Deb Blazer. Due to Blazer’s illness, the latke lesson was cancelled, and the ever- resourceful Friends of Jewish Seniors participated in a lively afternoon session of games and conversation.

click here to learn more about Friends of Jewish Seniors.