“A mother understands what a child does not say.” – Jewish Proverb

With Mother’s Day (May 10) on the horizon, we interviewed some mother/daughter teams to get their perspectives on mothering, both pre-COVID-19 virus and today. We thank Seena Dittelman and her daughter Lori Gibson, and Miriam “Mimi” Solomon and her daughter Judy Monzack for sharing their memories. 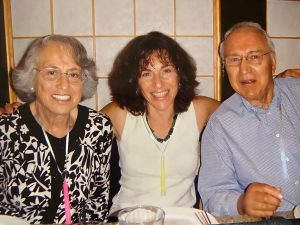 Lori Gibson, center, gathers with her parents, Seena and Martin Dittelman in 2008 at Seven Moons, a restaurant in North Kingstown.
Photo credit: Courtesy of Lori Gibson

“I’ve lived a charmed life. I was born in 1930 and everything went well. I commuted to Pembroke College [the coordinate women’s college for Brown University, which was then male-only] and had healthy children who had healthy children,” said Seena Dittelman, 90. “I feel that nothing bad happened to me until Martin died.” She and her beloved husband, Martin, had moved some three years ago to Tamarisk. Sadly, Martin, an accountant who was instrumental in helping to establish Tamarisk, died Feb. 8, 2017, shortly after relocating to Tamarisk. The Dittelmans have two children, four grandchildren, and five great-grandchildren, four of whom were born before Martin’s death.

Seena and Martin hosted family parties and meals, such as for Jewish holidays and Thanksgiving, including Thanksgiving at their Cranston home shortly before moving to Tamarisk. Although she became known for her cooking skills, Seena admitted on her honeymoon to not knowing how to cook. “My mother and grandmother always cooked; I [only] knew where the kitchen was,” so she and Martin together learned how to cook. International travel, many ethnic cookbooks, and a willingness to experiment inspired wonderful meals. Martin served as a sous chef and read recipes to Seena, who had vision issues.

Years ago, Seena was told that she could have a guide dog to assist her, said Lori (pictured above, in the middle), who recounted her mother’s response: What do I need the dog for? I need someone to read the recipe!

Asked what mothering advice she has, Seena said, “Be a role model. You can’t teach by telling… do it by showing it, living it, doing it.” Given that, Seena was clearly an excellent role model. Her daughter, Lori, begin hosting Mother’s Day celebrations at her home, once she was married. Lori is now retired from her career as a wildlife biologist with the State of Rhode Island.

More recently, Seena recalled that her grandson, Max, acknowledged that he hadn’t realized how much work and organization even a potluck family dinner demanded. While Seena and Martin prepared all the food for their family parties, she said, “It was delicious … for him to be aware” of how much work was involved.” Married with two young girls, Max bought a nice home in North Attleboro with the intention of hosting family celebrations. And, when Seena complimented her granddaughter for a pretty table-setting, her granddaughter told Seena: That’s what you did.

Cooking was a Dittelman family affair. “From the time that my son, Jeremy, had to stand on a stepstool to roll out the dough, we were in charge of making hamantashen for the whole family; we’d make over 100 pieces,” said Lori, who learned to cook from Seena. “I miss doing that so much.”

Now that COVID-19 has forced social isolation and physical distancing, Seena’s frequent outings with children and grandchildren have come to an end. How are they staying in touch? “Without the phone, it would be a disaster,” admitted Seena, who relies on telephone visits to stay in touch with her friends and relatives scattered across the country. “I don’t feel the need to see and touch them to keep up the relationship.” Lori, however, would love to use FaceTime or Zoom, if possible, to see and talk with Seena, whom she calls dynamic, loving, and nurturing.

“We’re a very close family and very careful with one another,” said Seena, who considers herself an optimist, even during this unprecedented pandemic. “My grandparents lived through …  the Spanish flu. It was horrendous; it could have wiped out the whole planet. If this virus is contained … then we’ll get through it.”

“I call Tamarisk the ‘Mother Ship’ for Mother’s Day. I can’t say enough wonderful things about the staff and residents; they’re phenomenal,” said Judy Monzack a retired teacher. Her mother, Miriam “Mimi” Solomon  moved to the Phyllis Siperstein Tamarisk RI Assisted Living Residence soon after Mimi’s husband of 72 years, Lenny, died in 2018. It was a difficult transition, as Mimi was mourning the loss of Lenny and leaving her idyllic life in Delray Beach, Florida. Although Mimi loved swimming and Florida’s warm weather, she has made a home at Tamarisk, where she thoroughly enjoys the people, the amenities, and the food. Mimi, who will turn 95 this November, regularly attends Shabbat services and especially appreciates the chopped liver and matzah ball soup.

Mimi recalled the couple’s extensive travels, which included an eight-year stint in Hong Kong in the 1970s, when Lenny worked as a senior vice president for Ideal Toy Corporation. Although Mimi explained that many of her memories of that time are hazy, she remembers not liking the matzah served at a Seder in Taiwan! “There were Canadians, Israelis, Americans … coming to and fro, and we welcomed whoever was Jewish during the holidays to our homes,” said Mimi.

This year, during COVID-19, Mimi celebrated the first night of Passover with her extended family via Zoom. Impressed by her mother’s ability to adapt to Zoom and other 21st-century technology, Judy regularly video-chats with her on her new Samsung Galaxy tablet.

After raising three children – David, who lives on Margarita Island, Judy, who lives in Warwick, and Bob, who died of kidney failure as a young adult – Mimi now has six grandchildren and six great-grandchildren. My mother was the focal point on Mother’s Day, said Judy, who often wrote Mother’s Day poems in her honor.

In earlier days, Mother’s Day was “assigned” to Judy’s maternal grandmother, Grandma Betty, who came to the United States as a Russian immigrant who never learned to read English. Judy fondly recalled Grandma Betty as “a warm, old-world-wise lady.” Grandma Betty used a Yiddish term to describe Mimi always being on the move and on the run. “That was my mother,” said Judy. “She still has more energy than anyone I know.”

Judy added, “Mom brought out my creative spirit; she is an extremely talented person.” Mimi’s artistic endeavors inspired Judy to volunteer in an elementary school art appreciation program. In an effort to make their pet parakeets feel they were out in nature – rather than in a birdcage in the kitchen – Mimi once painted an image on the kitchen walls of their garden’s weeping willow tree, Judy recalled fondly.

“I’ve always admired my mother for overcoming all the obstacles she experienced, including poverty … she worked to help support her family at age 12. It helped me understand her wanting to live her life for herself and Lenny,” said Judy. “I’ve always looked up to her for her keen curiosity, intellect and flexibility.”

Sharing her mother’s fondness for reading, Judy and a dear friend launched a book group at Tamarisk, which Mimi attended, shortly before COVID-19 shut down all gatherings. Tamarisk is filled with really smart individuals with wonderful stories to share, said Judy.