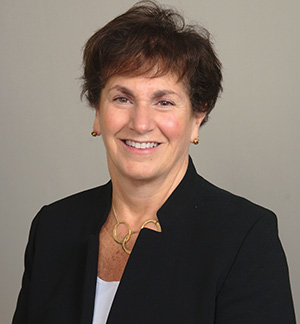 Erin is responsible for all business, finance and personnel operations for Jewish Collaborative Services. In that role, she oversees the agency and its professional staff in delivering the highest quality services to the community and all stakeholders. She also directs the planning process for the agency’s future development and growth.

Prior to taking on leadership of JCS, Erin served in increasingly high-level roles at Jewish Family Service of RI (JFSRI) for more than 20 years, culminating in 10 years as CEO. While at JFSRI, she increased the agency’s budget and number of clients served by more than a third; developed vital new programs such as Partners in Care, Case Management and Kesher; and oversaw the agency’s union with Jewish Seniors Agency of RI to form JCS. A long-term activist for elder rights, Erin also worked at Bristol Elder Services, where she implemented a new quality assurance system and administered protective services for elders.

In addition to extensive practical experience, Erin has been a teacher and mentor in academic settings. She has served as Director of the Department of Social Work at Roger Williams Medical Center, as a faculty member at Brown University’s Warren Alpert School of Medicine, and as an adjunct professor at the Rhode Island College School of Social Work.

Erin has served on the boards of numerous organizations, including the Somerset Council on Aging, the Association of Jewish Family and Children’s Agencies and Big Brothers Big Sisters of Greater Fall River. Currently she is a member of the Committee on Aging of the National Association of Social Workers’ RI chapter, the Massachusetts Council of Family Servicing Agencies and the Network of Jewish Human Service Agencies. Erin received her Master of Social Work at Rhode Island College and her BA in sociology at the University of Massachusetts.